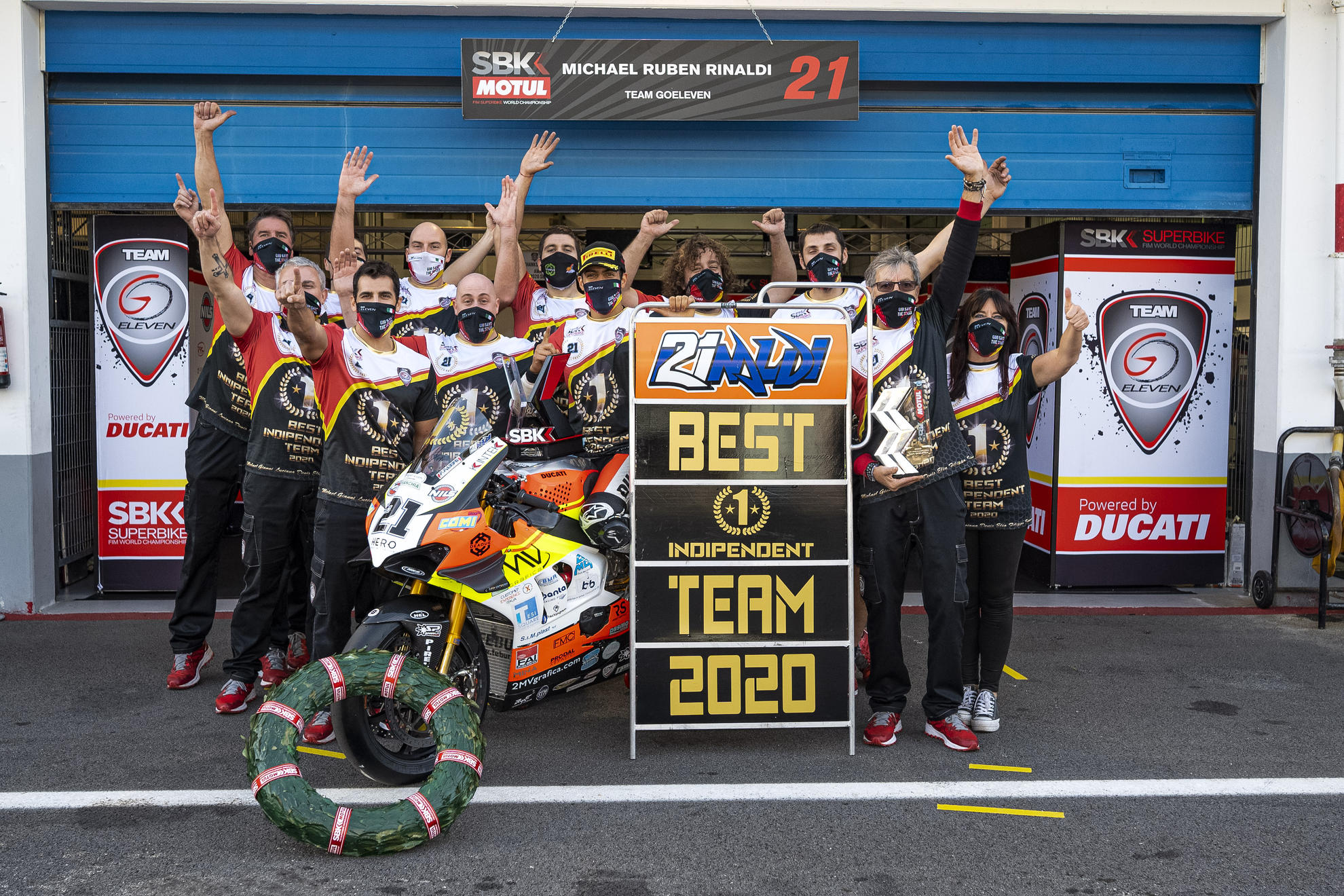 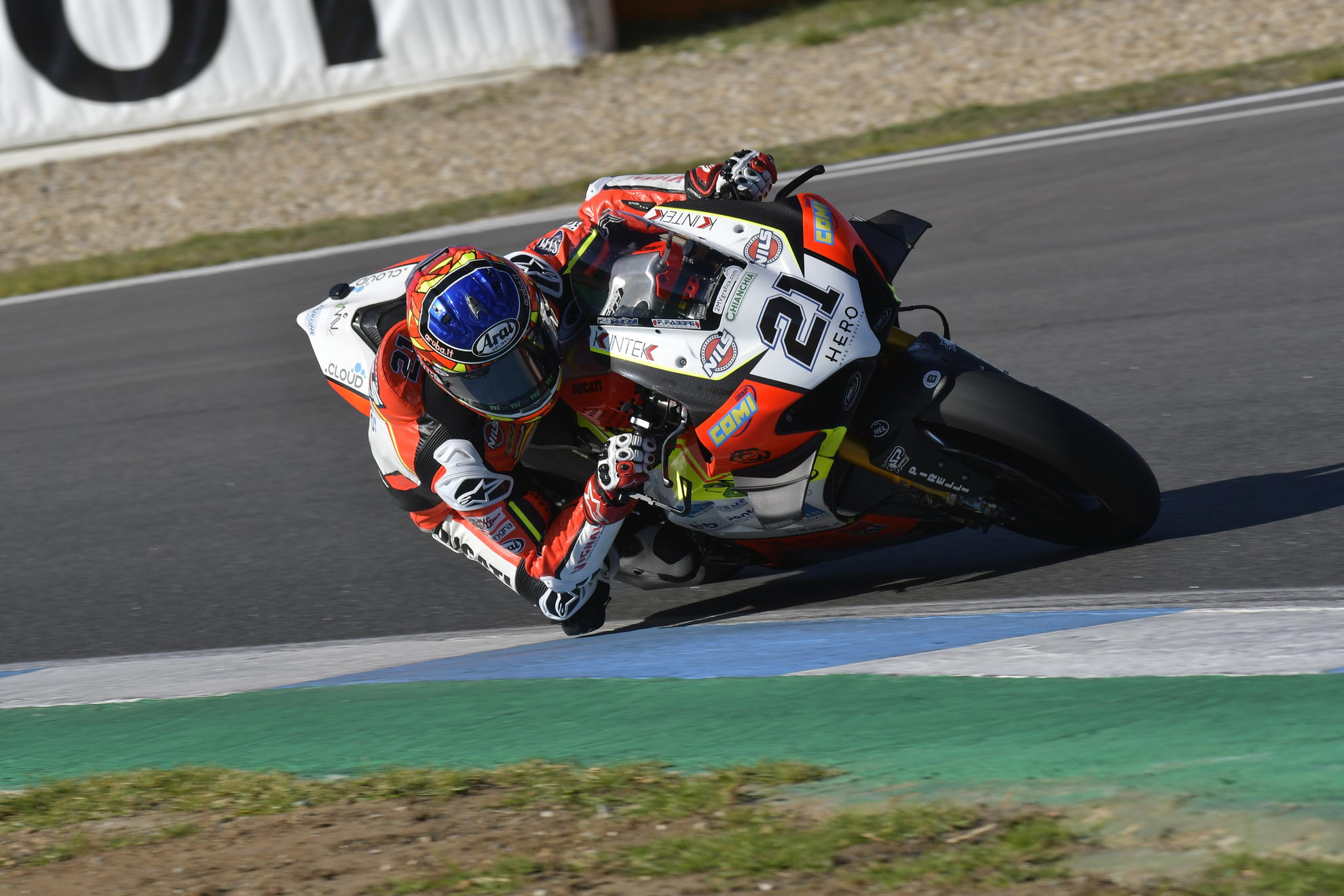 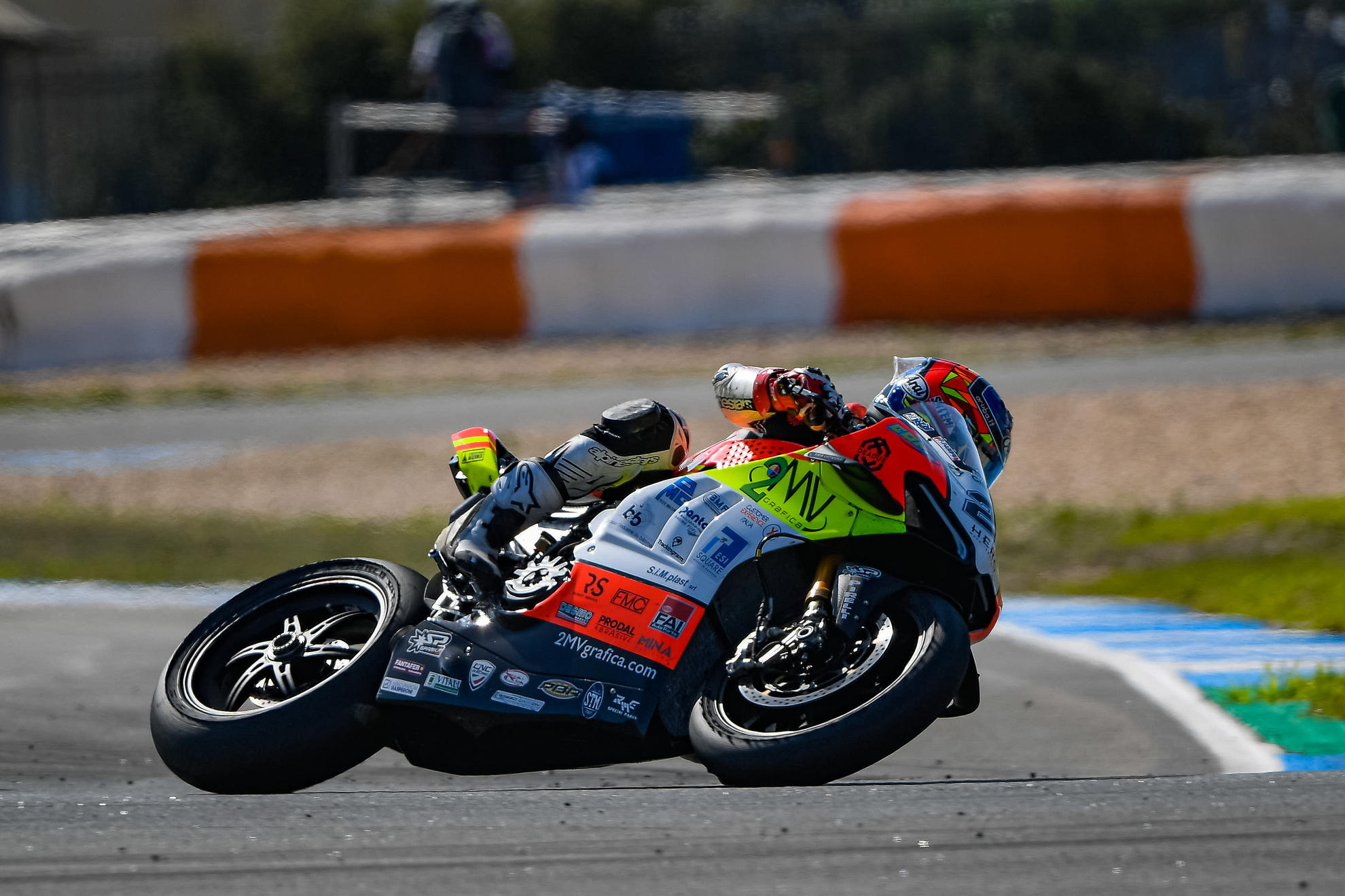 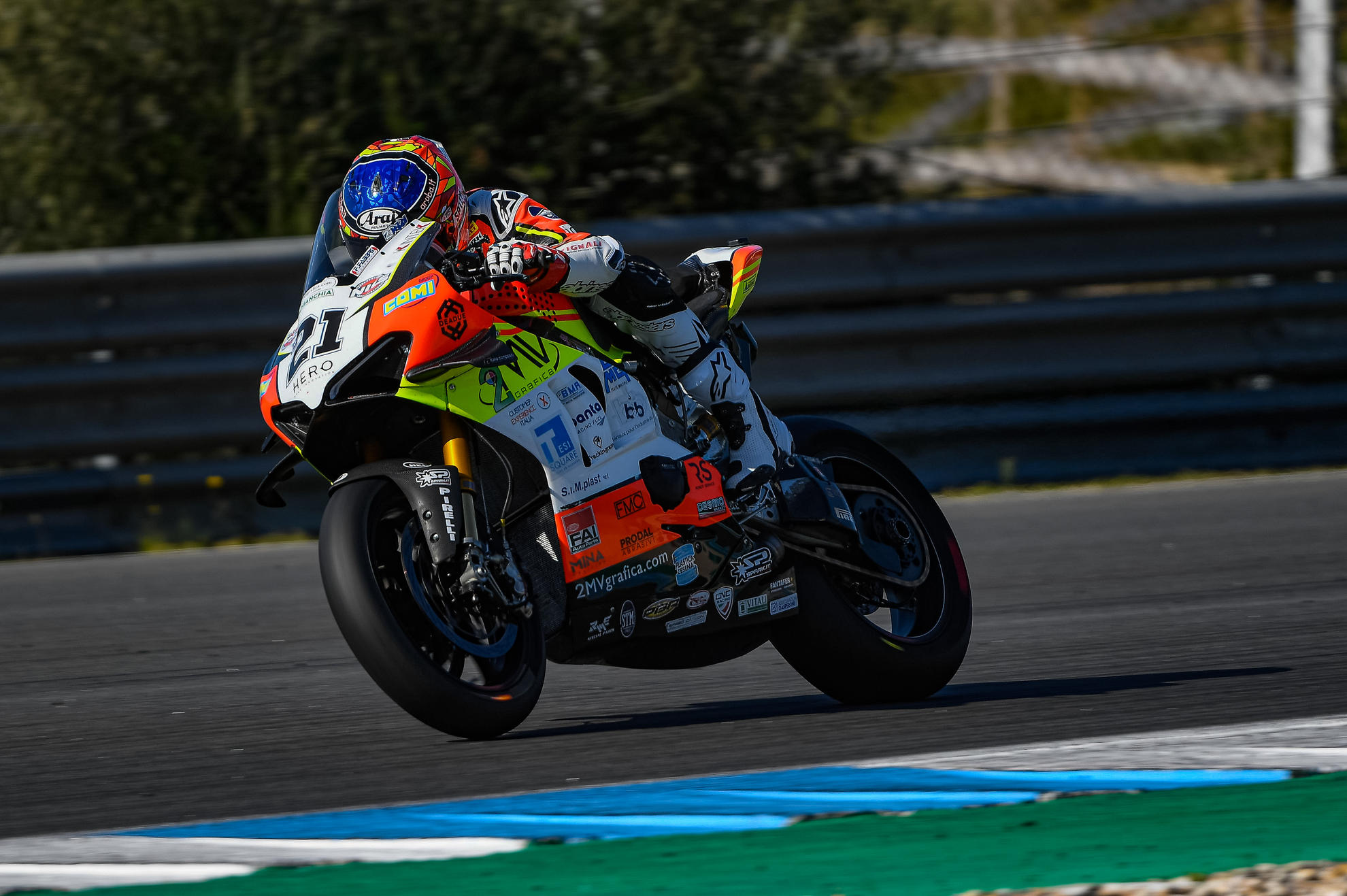 WE MADE IT!!!
Un unbelievable 2020 season, to crown a dream, reached with passion and dedication; on the Estoril track Michael Rinaldi graduated as Best Independent Rider in Superpole Race, while Go Eleven is Best Independent Team 2020 with the sixth place in Race two!

A day full of tension saw the rider from Sant’arcangelo di Romagna start from fifth position in the Superpole Race. A great fight from the first laps for the Top Nine, a result that establishes the starting grid for Race 2. Rinaldi fights, exchanges positions several times with Haslam, Fores and Bautista, finishing ninth in a difficult format for him. A good performance that guarantees him to be mathematically Best Independent Rider! Dedicated T-shirt and number "1" on the fairing celebrate the 24 year old from Romagna's first WorldSBK title!

Race 2 starts with a clear goal in mind: to win the Team independent championship. From ninth position on the grid he manages to defend himself at the first corner and sets his race pace. On new tyres, however, Michael struggled a bit and was passed by some riders finishing close to the Top Ten. From the middle of the race onwards, he improved his pace so much that he did the fastest lap on the last lap, closing the gap from the group in front and the battle lights on. Beautiful and spectacular battle with Folger, Fores and Haslam, which sees the Italian rider cross the finish line in sixth place. Top Independent in Race 2, and mathematically achieved our goal: Go Eleven is the Best Independent Team 2020!

Michael, The Go Eleven Team can only thank you for what you gave us all the season long, for this incredible 2020 each of us will carry inside forever. We had fun, we said a lot of bullshit together, we won together, we hit our goals. You are a wonderful person, and you have a unique talent ... good luck for the future!

Michael Rinaldi (Rider):
"Last race, it was difficult this weekend, but we made up for it well. In the Superpole Race we won the Best Independent Rider, but this afternoon I wanted to say goodbye to my team the way they deserved. I worked hard and we also won the Best Independent Team! It has been a fantastic season, full of good memories, where I have improved both on a human and riding level. I wish the best to this team that has given me so much and I can't wait for 2021, a great season awaits me, I can't wait to start it!"

Denis Sacchetti (Team Manager):
"It's a really exciting day for us, at the beginning of the season we didn't think we would get so much, we hoped, we dreamed of it, but winning the Best Independent Team, the Best Independent Rider, the podiums and even winning a race, is something great .... it is a magic that was achieved only with the hard work of each component of the box, Filippo Burgatti, Simone Corsini, Fabio Pasqualini, Daniele Cafaro, Alex Cionna, Alberto Amadori, Pierluigi Pieroni, Elia Ramello, Gianni Ramello, Luciana Fornaseri and .... all done with a great champion such as Michael Ruben Rinaldi! 2020 sees our name written in the history of Worldsbk, and it will always remain in the hearts of each of us. Personally, I wish Michael a future at the height of his dreams.
Thanks Go Eleven!"

RINALDI RAISES THE WEEKEND UP, AND OPENS THE SHOW IN RACE 1!

Go Eleven and Michael Ruben Rinaldi were able to raise their Saturday, on the Estoril track. After great difficulties shown in free practices, the staff was able to work calmly and methodically, without panicking, managing to raise, at least for the moment, in a particular weekend..

The FP 3 were fundamental to understand the way forward. In the morning the V4-R Go Eleven entered the track with a revolutionary set-up compared to Friday. Michael, however, did not feel the advantages, complaining of the same problems in braking. This indicated the direction to go.

In Superpole Michael immediately entered with determination, showing that he had found the right way to face the particular Portuguese track. In a session full of crashes, with Redding and Rea both on the ground in the first few minutes, the number 21 entered the top ten with the race tyre, just over half a second from the lead. Once he found the right pace, the qualifying tyre allowed him to significantly lower his best, finishing in fifth position. A really good step forward and an almost unexpected result until the morning. Second row conquered both for Race 1 and for the Superpole Race.

Race 1, the first race of the weekend at Estoril, begins with some doubts for the Go Eleven rider, because the last ten laps, the ones where the difference is made, we hadn't had the opportunity to test it before. At the green light, Michael starts strong, immediately overtaking a row. At the first corner he is second, in the between the Yamahas of Gerloff and Toprak. He holds up in high rankings for a few laps, but then the first four manage to fast the pace little by little. The battle for the Top 5 is unleashed with many riders in the group. Bautista, Haslam, Lowes, Baz and Michael swap positions several times, giving a show; at the end Haslam, Lowes and Michael manage to stretch, but the Italian missed a bit to try to overtake them. Excellent seventh position conquered, other points brought home, defending both the Best Independent Rider and the Team Ranking!

The sincere and heartfelt congratulations from all the Go Eleven Team go to Jonathan Rea, six times in a row World Superbike Champion. An immense honor to share the track with the strongest WorldSBK rider of all time!

Michael Rinaldi (Rider):
"After yesterday's sessions, we knew it was going to be a tough weekend, but I'm very satisfied in how we approached this race. We recovered from the difficulties, working well, trying to understand the areas in which to improve step by step, without making just one fast lap, that is completely useless. Today we had a good race, I could have been faster in the first part of the race, but it helped me to understand many things. It is a new track for us and there are still areas in which to improve. I'm sure that we can take yet another step forward tomorrow."

Denis Sacchetti (Team Manager):
"This track is totally new for us, as beautiful as it is particular and difficult. We didn't expect to face so many difficulties yesterday, but I'm really happy for the great work of the team that was able to react and change the weekend. Michael did not have the feeling in the race to be able to fight for the podium, and he was able to manage himself well. This is to underline how mature he is and ready for the jump that awaits him next year! "